we had a baby its a boy! 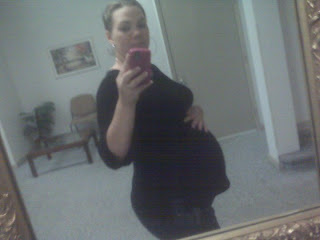 ok ok ok i'm lying ... we haven't had the baby yet but it was funny to say lol. we had our first nst on the 22nd. the dr came in the room to tell us how we have the most active little boy and that he looks perfect. we have a little over 5 weeks left until they induce me and a little over 6 weeks left until my due date. of course we haven't set anything up yet, had every intention to this past weekend but i ended up spending the weekend throwing up, yay. so now it's on to getting everything ready for the little guy. blood sugars are good. baby's good. big t's good. yay.
Posted by bethany at 12:01 AM 11 comments:

a little bit of everything ...

i've been so busy lately i haven't updated at all ... i've been reading everyone's blogs but i haven't had a chance to comment (so sorry! i'll be doing that this week!) so ... what's been going on ...?

i had my 31 week ultrasound on the 8th ... it went really well. they're going to let me attempt to make it until 39 weeks before they induce me. he wasn't breach anymore and it looked like the placenta previa was almost completely gone. he's still itty bitty and weighed 3 pounds 3 oz that day! but due to all of that they don't think i'm going to need a c section. :-D and my blood sugars are much lower, which the dr. is much happier about, lol.

diabetes wise things are looking pretty good. i'm still trying to check my blood sugar about every 1 1/2 hours to every 2 hours, which i'm great at during the week but on weekends i have a tendency to not follow the best schedule.

on the 9th we all (mom, dad, sister, her friend, brother1, brother1 gf, brother2, brother2 gf, myself, and big t) went to my cousin's wedding. it was almost a 3 hour drive one way but it was a nice wedding and the reception was beautiful.

and now for the fun stuff ... i'm still signed up to do the sugar bolus for the 1st week in dec!!! i'm super excited about it and i'm still working with some people for more items to use in the giveaway. so far i have some pretty fun stuff to use and i can't wait til it gets closer so that i can do a review on the awesome products and then give them to all of you!!! 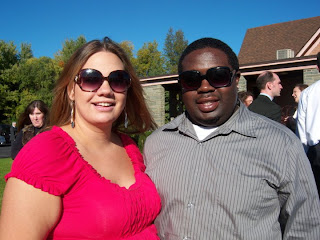 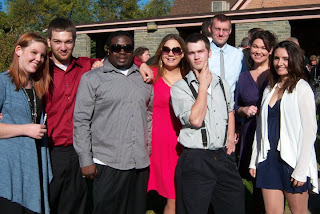 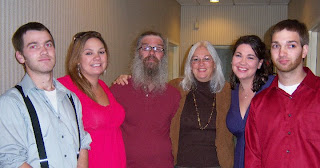 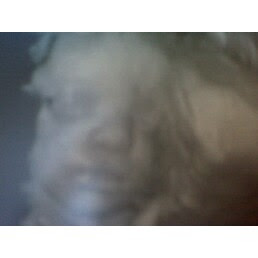 i have less than 9 weeks to go till baby t is born. :-D i'm so excited. we had our last dr.'s appointment on the 24th. the dr. wasn't happy with my bloodsugars, even though they were on average about 100 i had a couple that were between 150 and 200 so now we have to make sure that doesn't happen. we're back to checking every hour to two hours and making sure that i dual wave all of my boluses so that my sugar doesn't go high after i eat. yuck ... if i wasn't pregnant i'd be so happy with these blood sugars. either way i can't go past 39 weeks and we still have a 9 in 10 chance of a c-section. we find out this friday for sure about the c-section and hopefully schedule the date! it's getting so close.

this past saturday (the 2nd)was our baby shower. it was absolutely awesome. my mom, sister, and friend miranda planned it all. it was so much fun. we had somewhere between 70 and 80 people. there was tons of food and 3 gorgeous cakes. we were so blessed and received so many gifts for the baby and for us. the only thing that we still need is a crib mattress and a couple more plain white onsies lol. it was such a great day.

to add to it saturday was also my momma's 50th birthday! she spent her whole birthday making sure that our baby shower was perfect, so we tried to surprise her on sunday and plan a little surprise party for her at red robin (which is where she specifically wanted to eat lol) i'm pretty sure in the end she knew that she was going to red robin but i don't think she knew that her friends and mom and aunt would be there. either way it was a lot of fun and hopefully she had a great birthday. we got her some cute halloweenies and some gift cards and she got to wear a crown that my sister made ... and the people at red robin sang to her and brought her an ice cream sunday. (which i definitely helped her eat ... hehe.)

... oh and one of the girls we were with locked her keys in the car so my dad and both of my brothers had to break into her car for her lol. 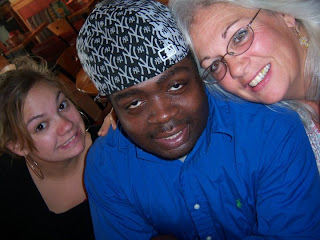 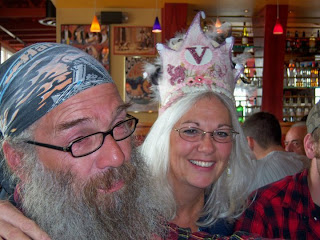 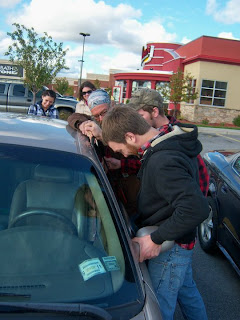 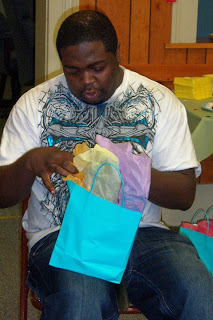 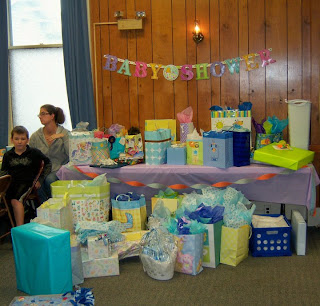 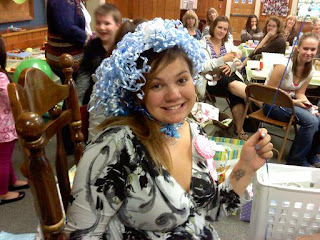 Sugar bolus is becoming pretty popular. Everyone's giving away more and more stuff, plus what a great way to get to meet new people and read new blogs, and who doesn't want to win something???

Anyway - head over to Meri @ our Diabetic life for her awesome give away. Make sure you comment before the 23rd @ midnight!

***and check out this giveaway! plus her blog is pretty awesome too. so much free stuff everywhere, i love contests! (though i can't remember the last one i won :-( haha***
Posted by bethany at 11:04 PM 1 comment:

Email ThisBlogThis!Share to TwitterShare to FacebookShare to Pinterest
Labels: Giveaways

I wrote a long post but for some reason my computer hates me right now and won't let me copy it from word and paste it in here. :-( Hopefully I can try again soooon and it will work?!? Until then... pictures to hold you over.

...There's lots of new, fun things that are going on. I'm super excited! To start I've signed up @
Candy Hearts to do the sugar sugar bolus at the beginning of december! and I also signed up @
D Tales to be a part of this months blogger basal. I've also been emailing and speaking to a bunch of different people who make some pretty cool diabetes products (pump packs, medic alert and diabetes awareness jewelry, test kits, and lots of other fun stuff,) so far I have a couple different people who have commited to donating items that I'm going to be using for my Sugar Bolus, I'll also being doing some reviews of their products so watch for them as a preview of what you could win!!!. (I do need to know what everyone thinks ... since I have a few different products should I split them up into packages and have two different winners or should I do them all individually and have numerous different winners???)

My mom, sister, and one of my best friends have been planning my baby shower and it's really coming together. all of the invitation have been mailed and the last of them will be hand delivered to the girls I work with tomorrow. It's less than 2 weeks away and I can't wait. It means we're once step closer to meeting baby T. we've already had over 30 people rsvp! :-D I'm so excited!

and speaking of baby t - we're officially @ 28 weeks! woohoo ... i'm getting bigger, baby T's getting bigger, and bit T ... well he's just being a great guy and dealing with me every day lol. we have another appointment this week. at the one last week the dr. decided that since baby t is doing so well they're going to attempt to let me go to 39 weeks. we're still looking at a 9 in 10 chance of a c-section, but i'm ok with that. my dr. was able to hear his heartbeat on the doppler instantly at the last appointment, it was extremely strong and loud. we won't have another ultrasound for 3 more weeks (a very long time when I'm used to having them every 2 weeks, i've already had 12 or 13!) we have the appointment on friday and then 2 weeks after we have our next appointment along with his next ultrasound. after that we'll start having our weekly nsts. and then it's the home stretch from that point on. looks like we'll be having him right around dec. 1st. i can't wait until the count down is finally below 10 weeks ... single digits seem much more realistic and do-able!

And on the diabetes side of life ... it of course love to rear it's ugly little head all of the time. my blood sugars have actually been better than ever through out my pregnancy. my last a1c was a 5.3. they needed to lower my basal rates because i was having too many lows. i think it's time we the rates back up at least a little because my blood sugars have been rising a little bit almost constantly, it seems like every day i have at least one blood sugar that is a tiny bit higher than the day before ... time to make my next endo appointment!

ok and finally here are the pictures that i promised... 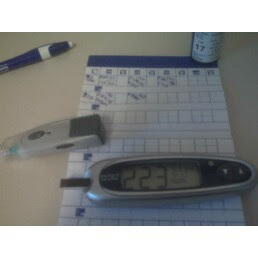 A picture of my diabetes tattoo that I got last February when visiting friends in Kentucky. (2002 was the year I was diagnosed.) 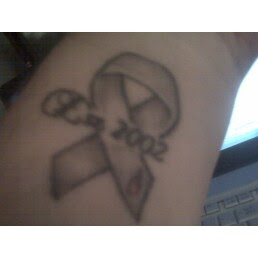 Me and big T being silly before going shopping on saturday :-D. 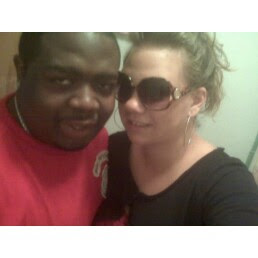 And my pregnant belly (in the work bathroom of course lol) 27 weeks 3 days. I'm pretty sure I'm even bigger now lol. I'm not feeling very well at all. I think I might be coming down with a little cold but it was bad enough that I called off work today to spend the day in bed. And litterally that's what I did - stayed in bed all day long. Tonight while Big T was leaving for work I decided I had enough energy to organize some of my diabetes supplies. I cleaned out some boxes and put other supplies into plastic totes. And this is where I'm at now ... 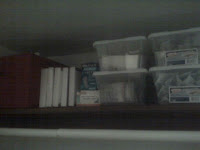 ...the red tote is full of random loose stuff that had no place, then there are extra boxes or reserviors, lancets, plastic totes - one has sites one has reservoirs one has test strips and one has tapes and iv prep. 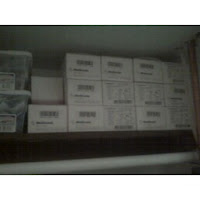 ...and then all of my extra boxes of sites.


On the baby front I'm getting pretty big. My belly grows every day. We have an appointment tomorrow morning, though I can't remember if it's just a dr. visit or a dr. visit and an ultrasound. Either way I'm sure they'll at least do the doppler to hear his perfect little heart. 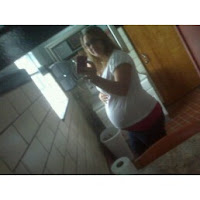 Wendy over at Candy Hearts is doing a pretty sweet (haha) giveaway. All you have to do to enter is leave a comment on her blog. Want extra entries? Follow her and make a post on your blog for her. She has the most adorable little girl who deals with diabetes everyday. So if you don't already read her blog head on over!
Posted by bethany at 11:32 AM No comments:

bethany
i'm 24 years old. my birthday is december 6. i hate to capitalize letters. i love the color pink. i love my friends and my family. i'm a type 1 diabetic and have a pink insulin pump. i'm currently attending college for social work, but work at a law firm. i like to take pictures. i love to drive (as long as it's not snowing). i love tattoos and piercings have have many of my own.